Freelancing: It Started As An Idea

on December 17, 2010
As I’m expanding my freelance career to become a more established freelance writer, I am expanding my blog and adding a website to promote my work in several freelance web sites, I see the numerous changes that are coming my way, and are already here. But these changes weren’t always in my mind, and I didn’t think about making this my career until recently. Becoming a freelance writer was an idea that I had a few months back, when I became a mother.

As the idea of being a mother can scare any woman, for me it lit a fire inside that made me want to use my writing skills and make money off of them. But it wasn’t as simple as it sounds to make money online, a person has to go though several steps, or in my case hundreds of steps to see, check and double check what writing sites are legitimate, which work and which didn’t. Being a freelance writer was a step I decide to take to have something that I knew could help my family in some way. This was a step towards my career that I did not think it would work at first; all I could do was try to make something out of it.

As I started to search the net for ideas on how to make money online, freelancing was just that: an idea.

I didn’t think much of it until I kept seeing just how much information there was online about this business, and how many people loved their job, including mothers! Online I found hundreds, and I do mean hundreds of people that were into the same business as I was, and were making ends meet in their homes, and some were even making more than what they desired through several online companies. From here on, my freelance idea became more to me. It wasn’t just an idea anymore, it was like an obsession to me, and I knew that, that is what I wanted to do; now I just had to make it happen. As I began my quest to find out as much information as I could about the types of freelance businesses, and about the people that did this for a living, I kept seeing the same thing come up over and over again: blogs and freelance writing sites.

As I searched for the best writing sites, and the worst there were plenty of people online to guide me through what I though was endless lists of money making ideas! I knew this was something that I could not only build for myself, but share with my family.

Freelance writing to me, was something that took time, effort and most importantly PATIENCE. This is something that every freelance writer, journalist or businessperson will tell anyone else looking for information, but its true. A person cannot expect to make something happen for them right away. It takes time for this process to happen, and it takes even longer to be successful online.

Since the popularity of this blog has been slowly growing, and a number of writers have loyally been following my work, I thought I would spice up this particular post on my blog, and expand on the subject. One of the things that many freelancers often worry about, is how they are going to get traffic to their blogs or their websites. When freelancers first start working, it is no secret that promoting themselves and their work takes time and patience, since there are already so many freelancers out there. Being a freelancer can be easy, but taking a business from the ground up can be hard, and many find this part extremely difficult. The one thing that freelancers can do in order to make their blogs or websites count is be different with them. There are hundreds of freelancers on the web, and this can make "standing out" a bit harder. Most of the time, freelancers are in such a tight budget that they are not able to buy a domain, and so they stick to using blogs or fre 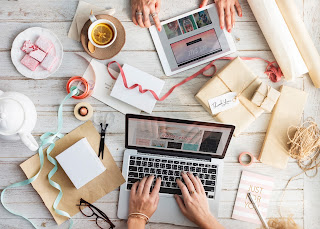 Breaking into the Freelance Business

Freelancing can be a gift. Truly, it can. However, for far too many writers (especially newbies) it can be tough. Let's face it, it can be hard to find those long-term paying clients. I should know, it took me 6 months to find mine, and to this day, it can still be tough to find more long-term paying clients. Breaking into the freelance business shouldn't have to be tough. There are ways to make freelancing fun, and even enjoyable all the meanwhile trying to make that FIRST paycheck! Here are some things that I learned (I'm still learning), and have gotten me through some tough times. 1. There WILL be slow times. First things first. I think it's safe to say that freelancers will go through tough times. There will be moments of doubt, pain, sleep deprivation and even failure. Freelancing is funny that way. While the thought of FINALLY being your own boss is exhilarating and contagious, it can also have its "seasons". By seasons, I mean days, w

Being a freelance writer has many benefits. One of the many is knowing that you can make your own schedule. This can be remarkably easy if writers know how to set up a schedule and most importantly FOLLOW IT. Not one freelance writer will ever get rich or make a descent living only investing an hour of their time writing a day, while playing around in the computer. 10 Habits of successful writers, and how to achieve them. They set a schedule and follow it:  Do you know what you do all day? If you say you write "all day long" check your work, and check how much you are earning a DAY. Do the numbers match? If the answer is NO, then your best bet is to make a schedule so you can treat this job like a regular job, so you can start seeing progress along the way. It may be a bit hard to set up a schedule, and be able to follow it from home, but this is the best way to start taking this work seriously. They make writing goals, and achieve them.  How much do you write? Do you